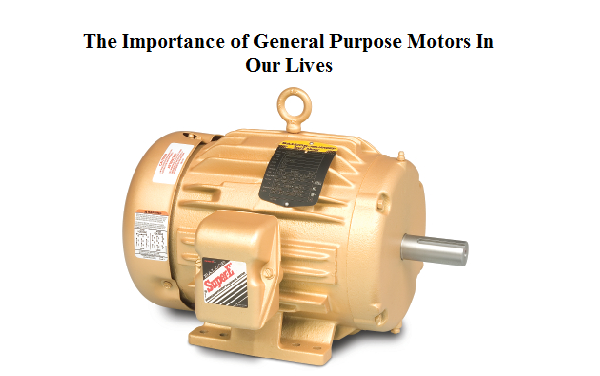 What is General Purpose Motor?

General-purpose or three phase induction motors are devices that run on a three phase AC supply and are sometimes referred to as ‘’synchronous motors’’ since they operate at a speed disparate from synchronous momentum. These motors are intrinsically built for everyday use in any environment. Which is why they are used in applications that include pumps, compressors, conveyors, pumps, material handling, and machine tools to name a few.
Moreover, these motors are a staple of industrial applications because of advantages such as low cost, sturdy construction, high efficiency, and good power factor. Some noteworthy manufacturers of general-purpose motors include Elecon, Rotomotive, Havells, ABB, etc. So, why are three-phase motors the preferred choice?

Over the years three-Phase general-purpose motors have established an uncanny knack for providing a plethora of utilities on the go. No wonder their utilities range from causing little or no voltage flicker at the motor start to having a comparatively longer maintenance-free lifespan than single-phase motors, they have it all!

Furthermore, three-stage general-purpose motors cost considerably less (approx. 30 to 50 percent less!) than their single-phase counterparts. But, perhaps, their USP lies in the much larger range of horsepower size they possess.

Here are some more factoids about these robust devices!

If your home in on a three-phase motor for a particular load, for instance, pumping water, the motor can run for years on end without facing any major hindrances.

These self-starting behemoths don’t need a starter! Be it small capacity motors (less than 3 HP) or even larger motors, they can all sustain without starters. However, users are propelled to use starters due to weak distribution systems for bypassing the travesty called ‘’voltage dip’’ which can invariably affect other consumers! Sigh.

Due to their innately efficient characteristics, three phase induction motors are some of the most widely used electric motors in India today! In fact, over 75% of the mechanical power harnessed by industries is due to three phase induction motors that bank upon– good speed regulation, operating characteristics, and sheer absence of commutators! What’s more?

They are also used in the agriculture industry. As a matter of fact, with the large-scale mechanization of farms, three-phase induction motors have gained prominence taking into account the electrical power requirement for carrying out farm renovations or expansions.