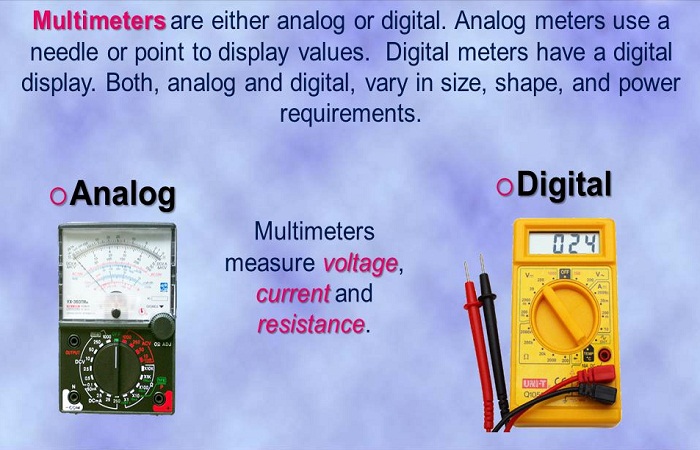 There has been a long-standing dispute between hordes of multimeter enthusiasts on le Internet that’s been hogging the limelight lately. And, for all the wrong reasons. For those of you who are unfamiliar with the kerfuffle, here’s a tidbit of insight into the world of multimeters– a Multimeter is a device that measures voltage, current, and resistance.

It can be classified into two types- Digital and Analogue Multimeter, or Ohmmeter. These two subdivisions are akin to two different sides of a fence and have become a huge hassle for people who are trying them out for the first time. Rightly so, before buying a multimeter a person often stumbles across one rather peeving albeit, simple question:

Well, a digital multimeter is a voltmeter wherein digital display directly flashes the value, whilst an analogue multimeter or Ohmmeter boasts of a steady scale over which a deflecting needle illustrates the measurable value. While digital multimeters are the epitome of modern devices, ohmmeters are old and experienced and slightly off-the-shelf.

However, you can still buy quality ohmmeters online from reputed brands such as Crown, Meco, etc. to name a few! Both devices are great for measuring electrical voltage, resistance, and current, but which of them steals the show for prolonged use? We find out!

The first or initial reading gained by a digital multimeter might not be an accurate manifestation of the electricity passing through it because the current of flowing electricity can suddenly fluctuate at any moment. Comparatively, an analogue multimeter accurately showcases the abrupt fluctuations that are taking place with the electrical flow thanks to a constantly changing display!

Although the readings aren’t exactly like on a digital multimeter, analogue multimeters give a general reading of rapid fluctuations and ward you off against potential problems with the electricity flow.

Since analogue multimeters have an in-built fluctuating scale, it is up to the user’s expertise and prudence to set up the scale correctly and ensure the results gained are legit. Oftentimes, it leads to the wrong scale being set, which aggravates the problem to inaccurate readings. In stark comparison, a digital multimeter automatically sets the scale and tells the readings to you.

Besides, analogue multimeters employ several options for displaying data such as a galvanometer for registering movement, or a simulated pointer or bar graph! Analogue multimeters also provide a formidable test rating and generally retain their price value.

With the addition of a galvanometer, ohmmeters are often deemed better than digital multimeters when it boils down to determining the gradual rate of change of a measurement reading. And, despite all the ‘accuracy’ accusations and the ensuing brouhaha, ohmmeters (in spite of being old) are capable of measuring with three to five per cent of accuracy.

On this front, digital multimeters simply rout the humble ohmmeter fair and square. They are renowned for performing tasks outside their ambit of measuring mere current, voltages and resistances. For instance, a plenitude of digital multimeters can effectively test things such as light, humidity, and even sound. Thus, it’s safe to say they have significantly outstripped the abilities of the ohmmeter.

Insofar as readings and ease-of-use are concerned, digital multimeters win hands down. That being said, analogue multimeters or ohmmeters still have their unique merits and are definitely worth a shot if you are someone who is seeking a cheaper multimeter solution.