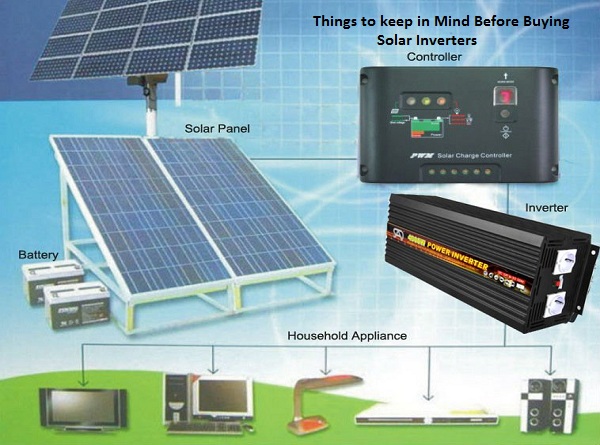 A solar inverter is an electronic system which is used to convert the variable direct current output of a photovoltaic solar panel to alternating current having a frequency that can be utilized by the end-user to run appliances, among other uses. They are usually set up outside homes, offices or factory premises so as to be constantly exposed to sunlight. A typical solar inverter consists of four basic components—namely, the solar panel, the charge controller, the battery and, lastly, the inverter. An inverter is an indispensable part of the solar inverter system because a solar panel is not capable of producing alternating current all by itself. A solar inverter consists of large-sized capacitors which help in the storage of power, besides also improving the inverter output.

Even though a regular inverter is the same as a solar inverter in terms of its overall utility to the end user, the main point of difference is the circuit composition; the latter has a solar charge controller and a terminal to connect the battery and the solar panel of the right rating to. The solar inverter, needless to say, reduces the user’s overall electricity consumption and, effectively, the money spent on paying the monthly utility bill.

Discussed below are a few things that you must keep in mind before buying a solar inverter for your home or office:

As with any other device, solar inverters too must be checked for their level of safety. It is very important that you ensure that the solar inverter is certified safe by any independent testing laboratory prior to purchasing it and subsequently putting it to use.

How long your solar inverter ends up lasting is actually dependent the most on its battery. Thus, it is very important to choose the battery for your solar inverter very wisely. Battery capacity is defined as the maximum number of hours that a battery can power all the devices; in other words, the battery capacity can be arrived at by taking the product of the power requirement, in watts, and backup hours, in hours, and dividing it by the voltage, in volts.

An inverter is required to supply two types of powers—peak power and the typical power.

You could buy a solar inverter for your facility from reputed brands such as Navaid, Tracksun and Su-kam to name a few.